I’ve been having lots of fun playing around with die cutting and figuring out how to make as many designs as possible from a single die. This felt flower diy creates a gorgeous multi-petaled gerbera daisy without all the fuss of individually cutting every single petal. 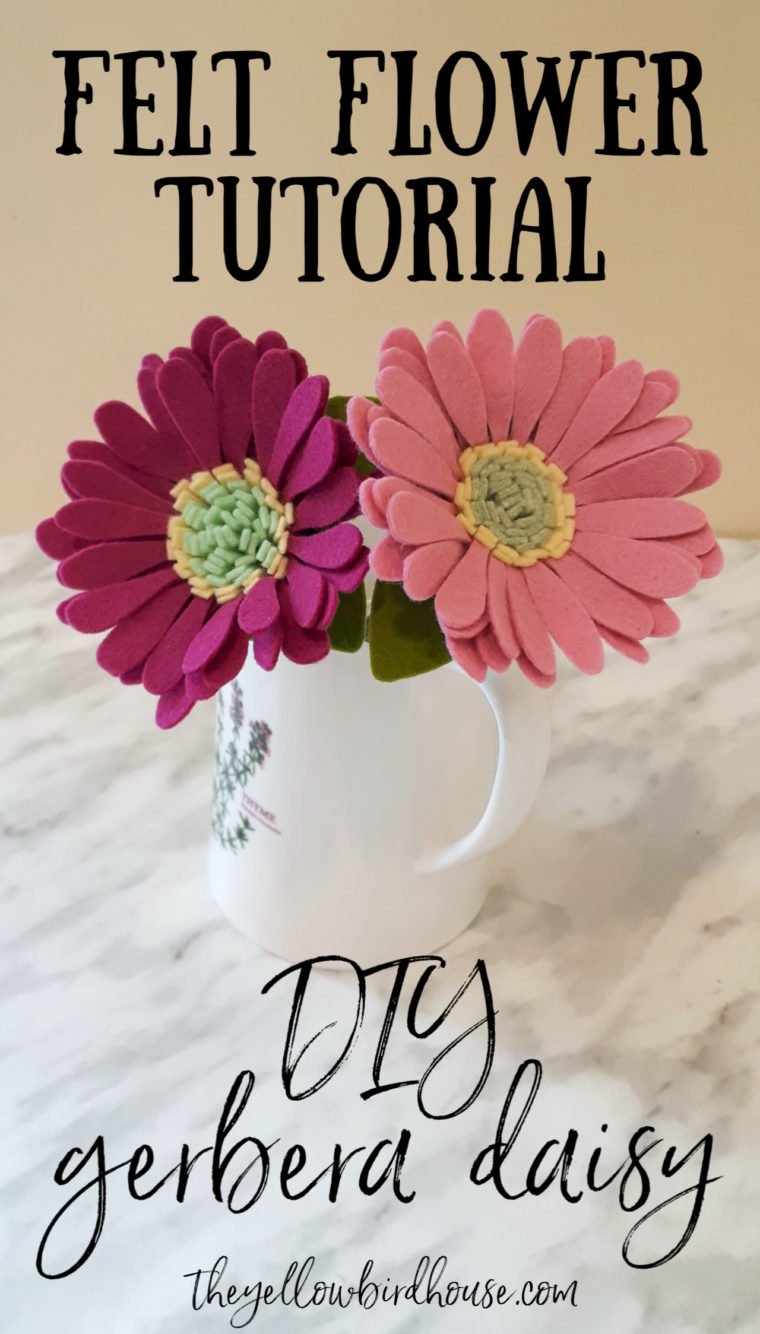 I love the natural look of this flower. The petals aren’t identical, and they have so much movement that the daisy looks different every time you look at it! You can really fluff it and shape it too, giving it lots of dimension.

Creating this flower requires the use of this die. BUT, when all is said and done, I’m hoping we’re going to create an ENTIRE bouquet using this one die! So it’ll really be worth it. 🙂

Here is a tutorial for a felt poppy using the same die!

Here’s what you’ll need to make one gerbera daisy: 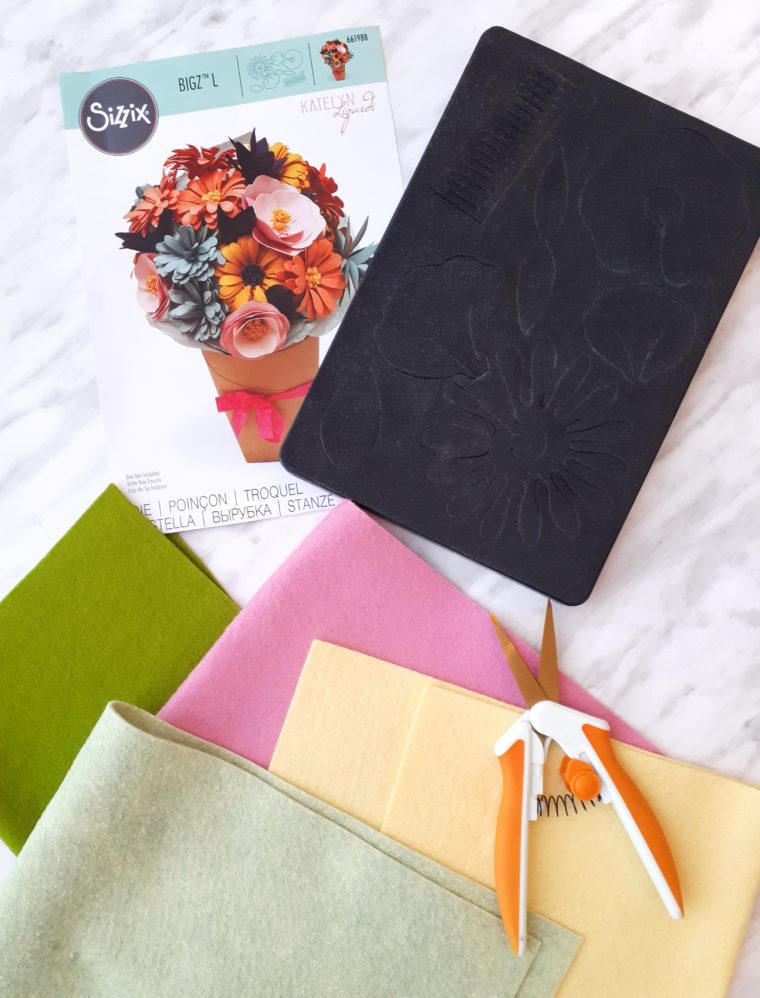 Cutting out the Pieces

If you need guidance on how to cut out felt using steel rule dies like the one above, check out this tutorial I wrote. 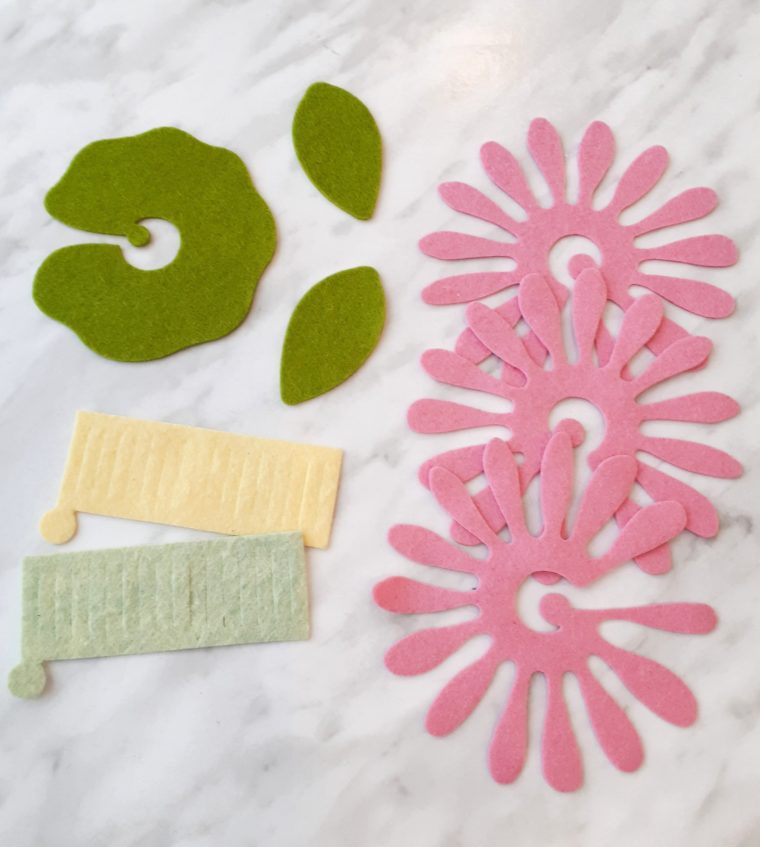 Here’s where we start getting creative. You don’t have to use a die ONLY for the design suggested by the manufacturer. You can cut bits off and add strips and do any number of creative alterations in order to produce unique designs! That’s the fun part!

First, cut the 2 strips of fringe in half and remove the little circle pieces.

Then take your shears and go along the edge of the green donut piece and create deeper waves. These spring action shears are PERFECT for this kind of task because they give you maximum control. You basically hold your scissors still and move the felt along to cut it. 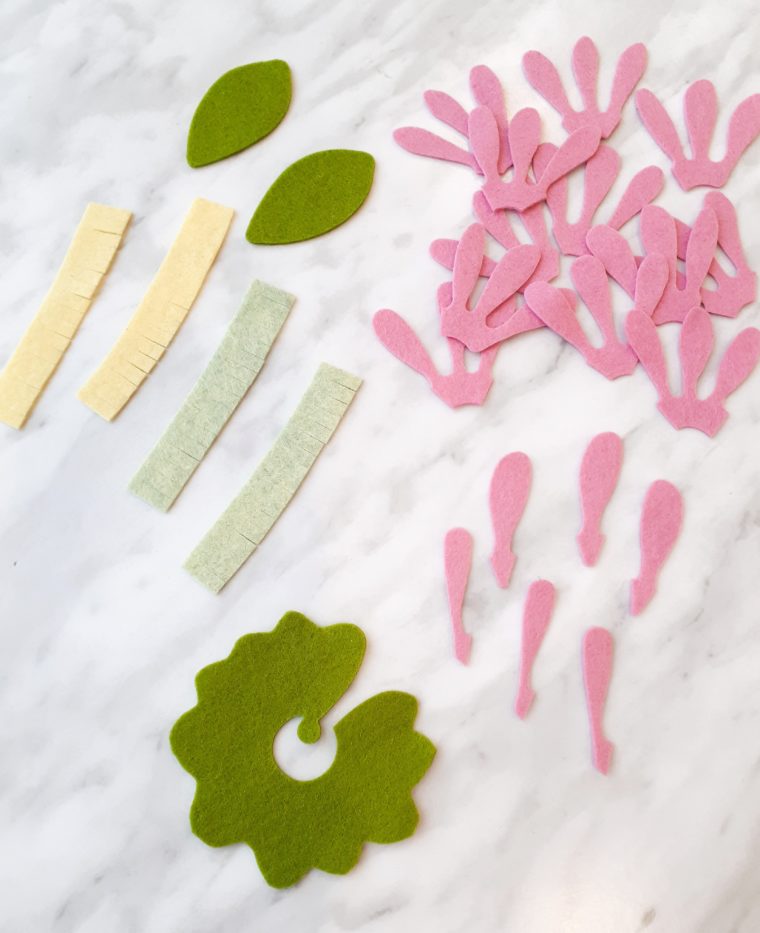 Now you’re going to take each section of 3 petals, add a dab of glue in between 2 petals at the base and fold the 3rd petal in so it fills in the space between the first 2 petals.

Take the light green pieces of fringe and roll them using a dab of glue at the beginning and end of the strips. Abut the 2 strips.

Wrap one of the light yellow strips around the green in it’s entirety. Take the second yellow strip and only wrap it around until there are exactly 2 layers of yellow fringe. Trim away the extra yellow and apply glue to the bottom of the flower centre to secure everything into place. 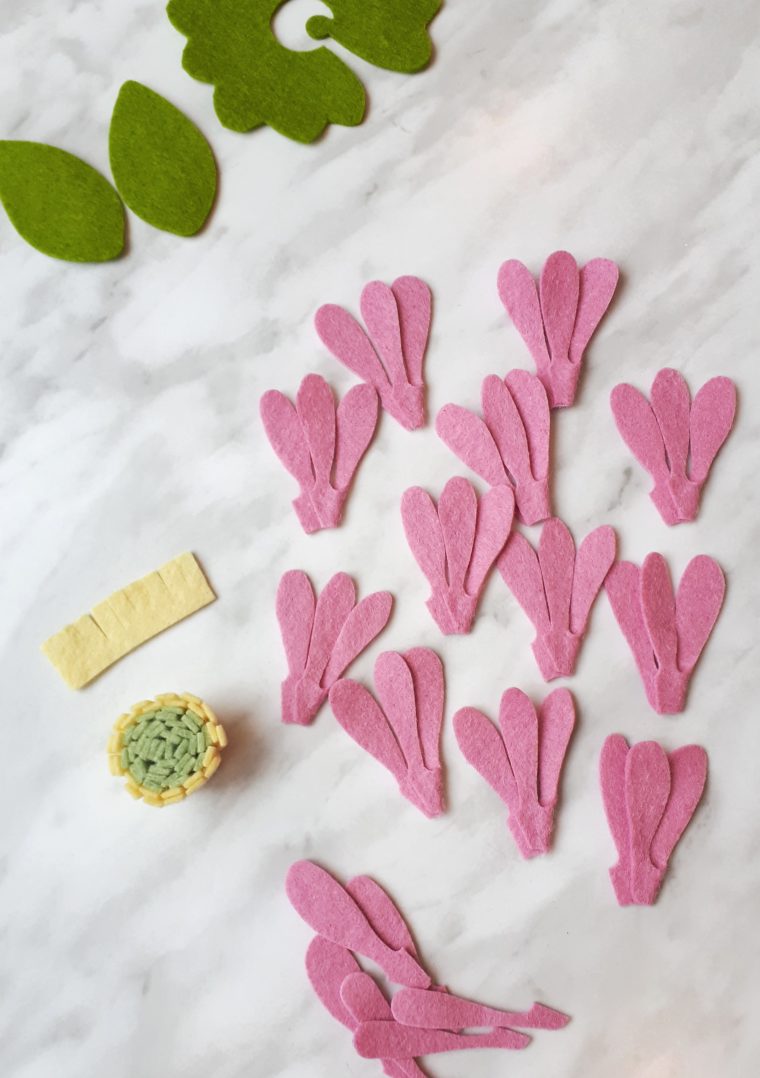 Now we can start adding petals to the fringe centre.

For the first layer: Position a group of 3 petals so that the single petal rather than the 2 petals is against the fringe. Add a dab of glue to the base of the grouping and secure it to the fringe.

Place another group of 3 petals on the fringe exactly opposite the first group.

Add 2 groups of 3 between them, on either side of the fringe.

Ok, bear with me. The idea is that you need to evenly space 6, 3-petaled groups around the fringe. 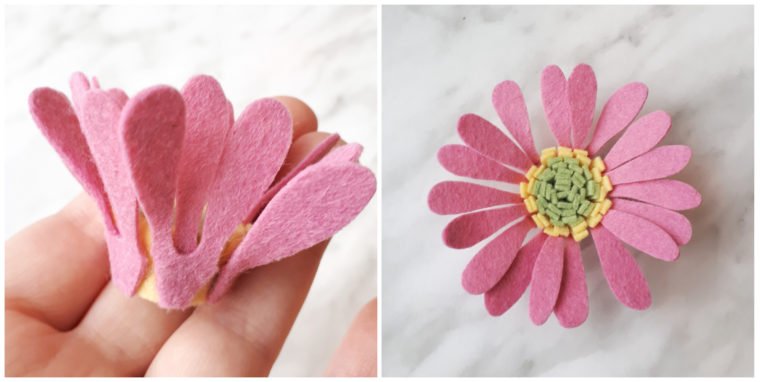 Add the second layer of petals:

Place the last 6 groupings of petals evenly around the flower, glueing them in between the groups of the first layer to fill in the spaces. 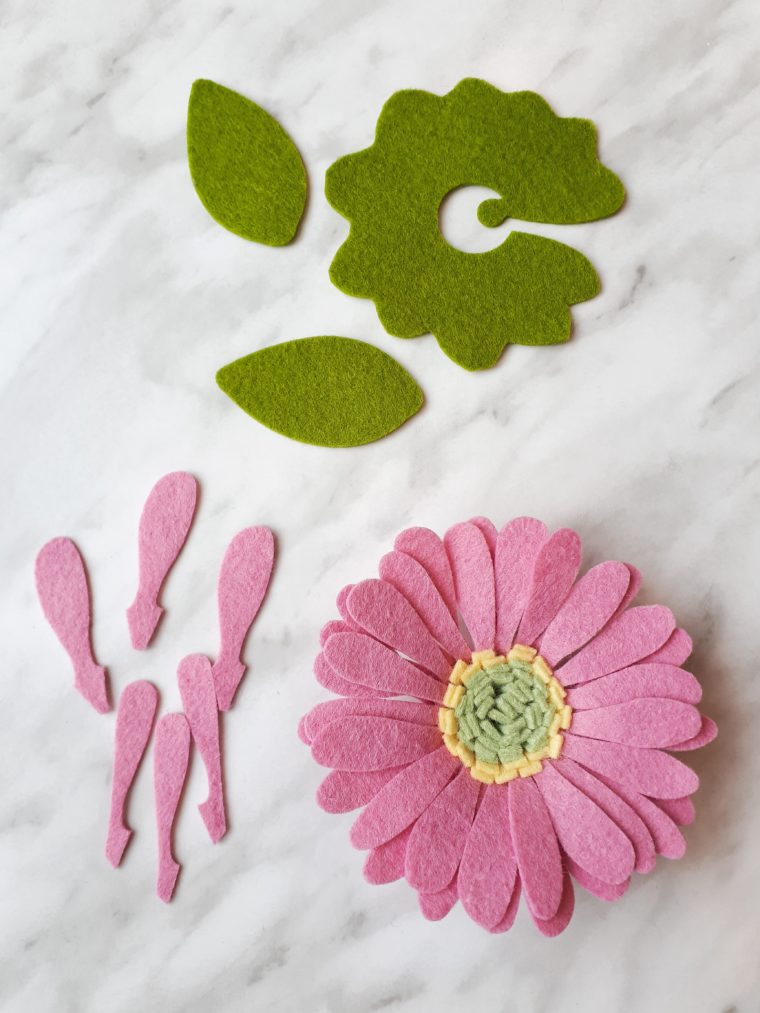 Then all you do is use the 6 single petals to fill in any gaps! Totally at your own discretion.

For a flower with a nice flat center, this is how I like to make the stems.

Pinch the very end of the floral wire with the pliers.

Hold on tight and wrap the wire around itself a couple of times.

Bend the long length of the wire so that it is approximately leading down from the center of the spiral pad.

Be generous with the glue and secure the spiral to the flower center. 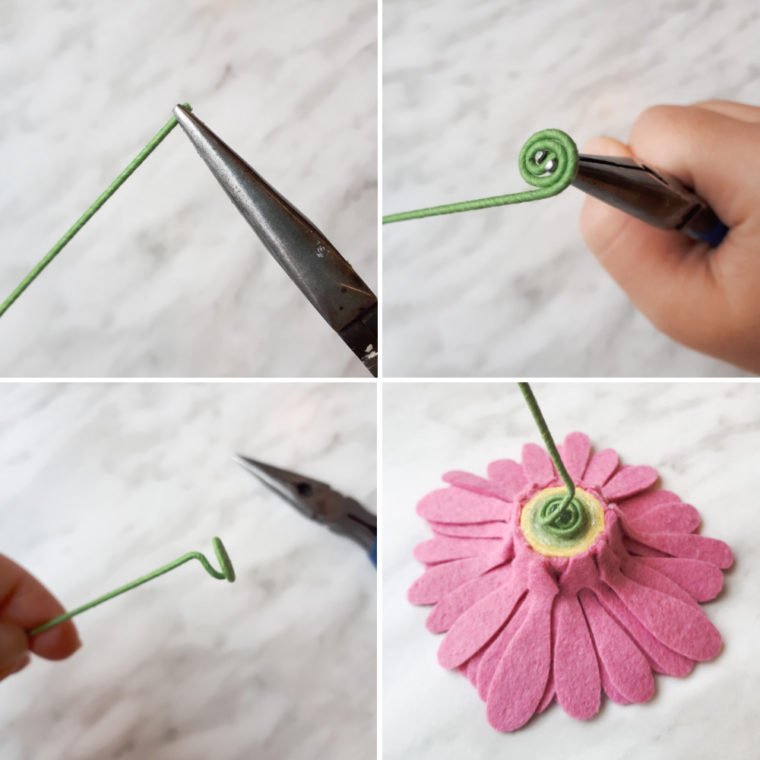 And make sure you check out this Felt Rose Stem DIY and this Felt Calla Lily too.

Now for the green stuff that ties it all together!

Take your green wavy donut, overlap the ends of it and glue. Slide it down the wire, add glue around the wire spiral and secure the donut.

Working in sections, add small dabs of glue along the wavy edge of the donut and press it up against the flower petals. Hold each section in place for a few seconds until it’s really secure before moving on to the next.

This might take a little practice because it’s not a perfect fit. Which I think helps the flower to look more natural and give it a great shape.

Lastly, take your 2 leaves, snip a tiny hole near the end of each one, slide them down the wire and glue them into place such that they cover up any of the wire spiral that’s still exposed. 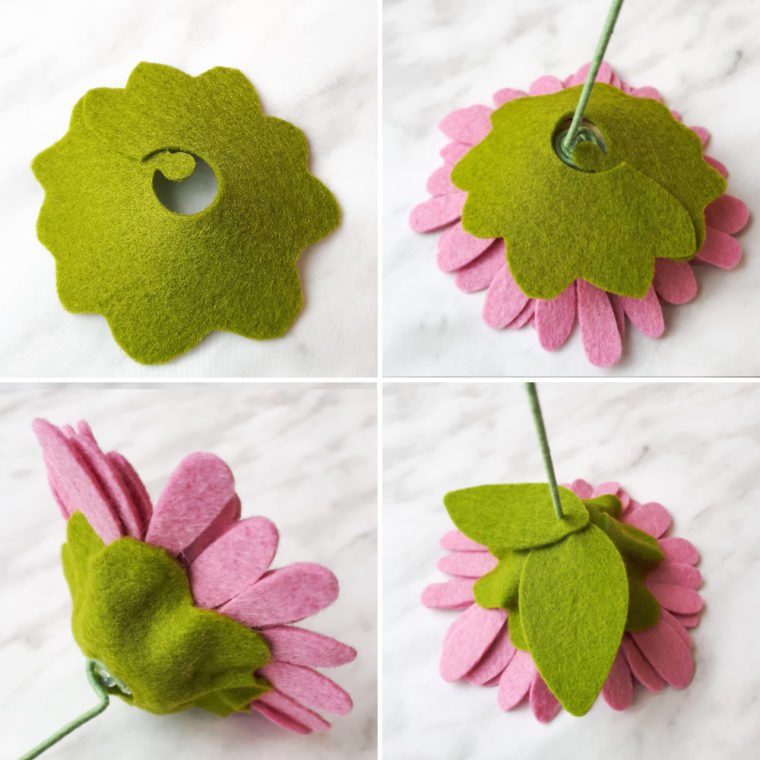 All done! So pretty! 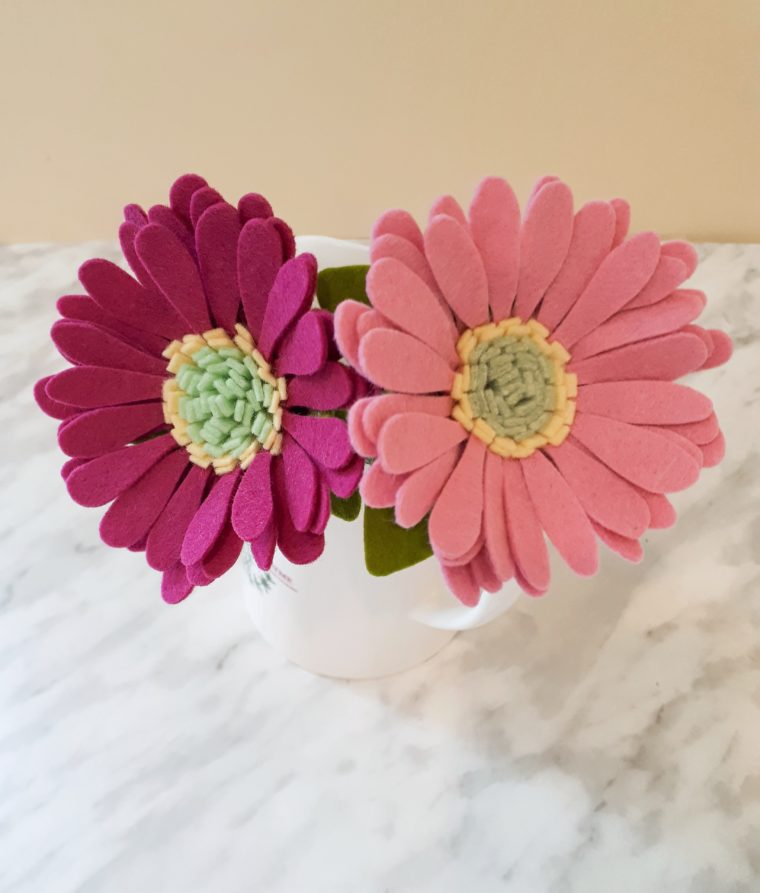 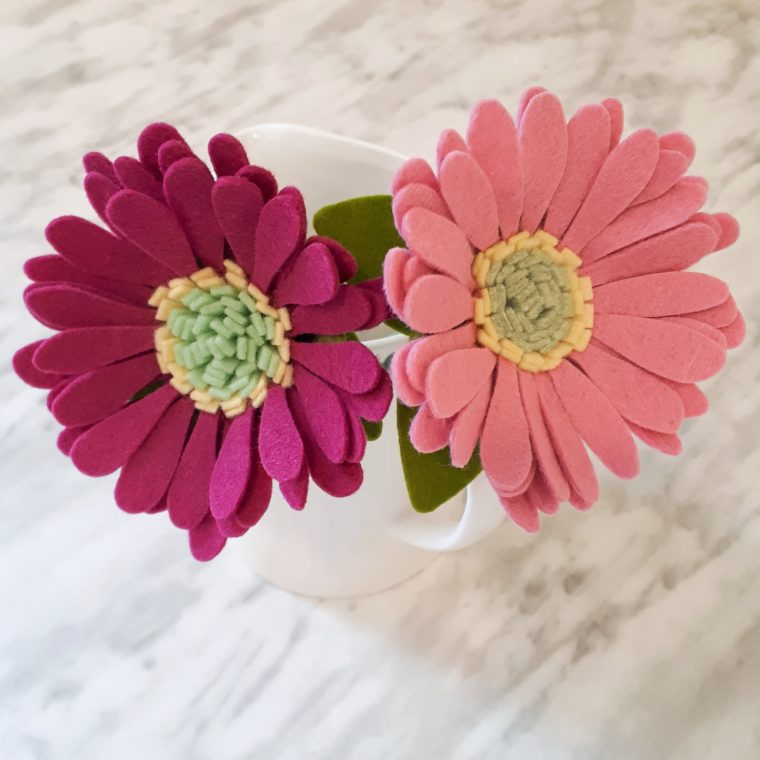 Don’t forget to check out the DIY Poppy I made using the same die.

Any cookies that may not be particularly necessary for the website to function and is used specifically to collect user personal data via analytics, ads, other embedded contents are termed as non-necessary cookies. It is mandatory to procure user consent prior to running these cookies on your website.