I promised that I would try to create an entire series of different flower designs using a single die. First I made the gerbera daisy and now here’s a cute DIY felt poppy using the same die! 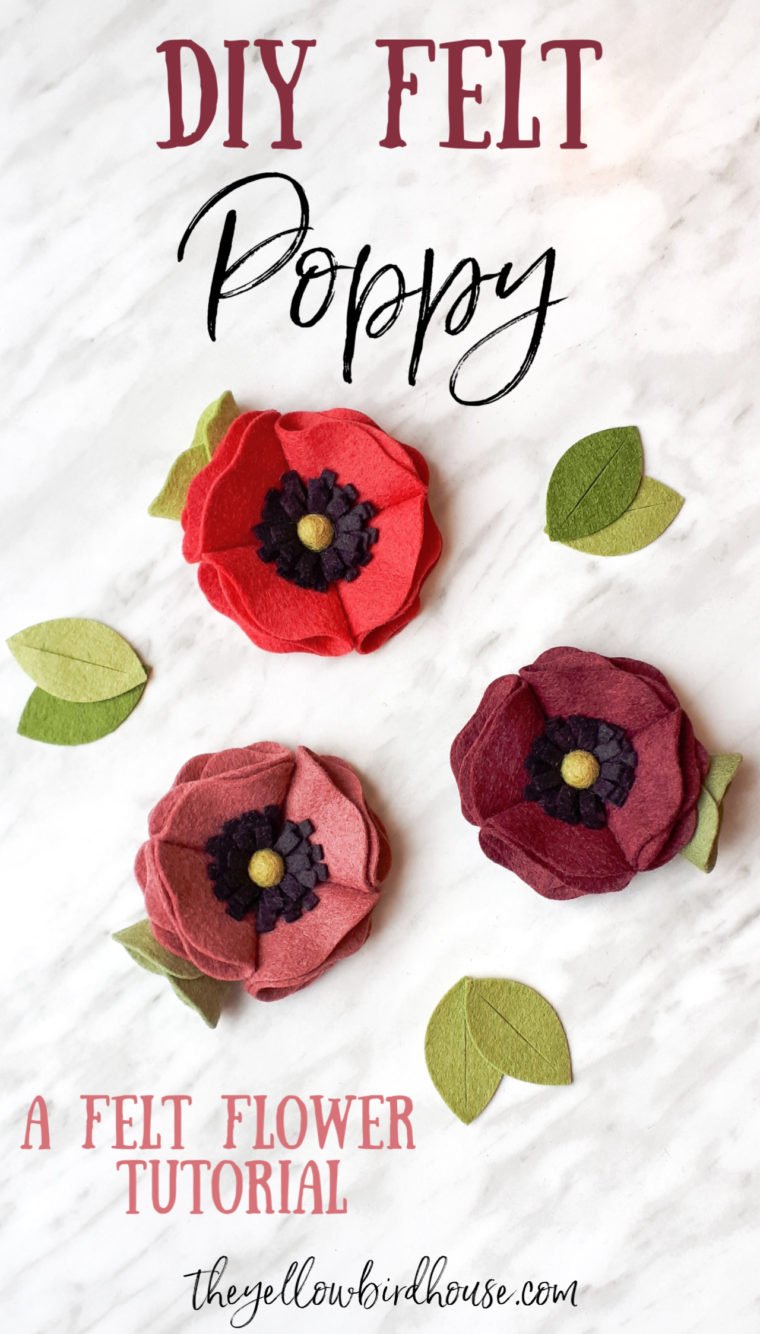 I opted not to put this poppy on a stem, just because there’s lots of different ways to use this flower. I didn’t want to limit it. You could put a hair clip on it or attach an elastic to make a headband or bookmark. You could string a bunch of them up into a garland or use them in a wreath or mobile. So many options!

But adding a stem would be pretty easy, just do it the same way as I with the daisy.

Check out these flower tutorials too. These all have free printable patterns:
Calla Lily
Rose Stems
Large Rolled Rose

And this gorgeous rose pattern is available in the shop! 🙂

The die used for this felt poppy is the Sizzix Bigz L Bundle of Flowers. I used the same die to create this gerbera daisy. I’ve been using it to design other flowers too, and hopefully I get around to writing tutorials for those!

Here you can see all the different elements that this one die can cut out: 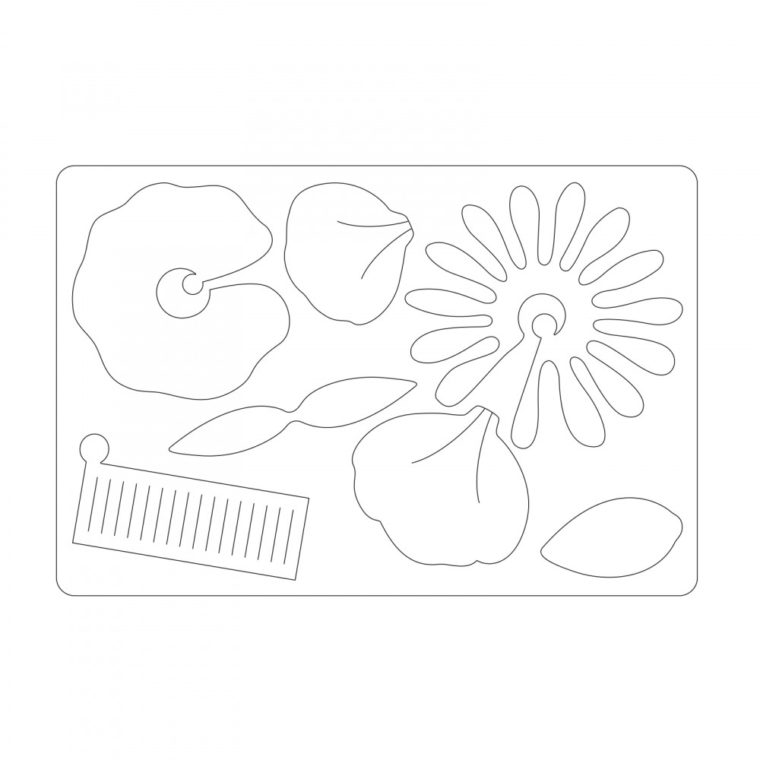 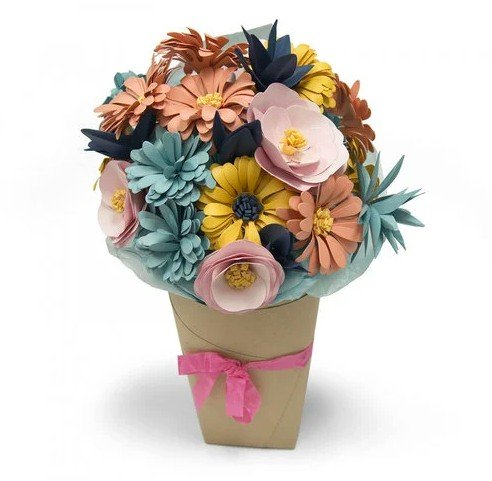 I also got to try out the new version of my favourite Surebonder glue gun. It has a finer point than my last glue gun. 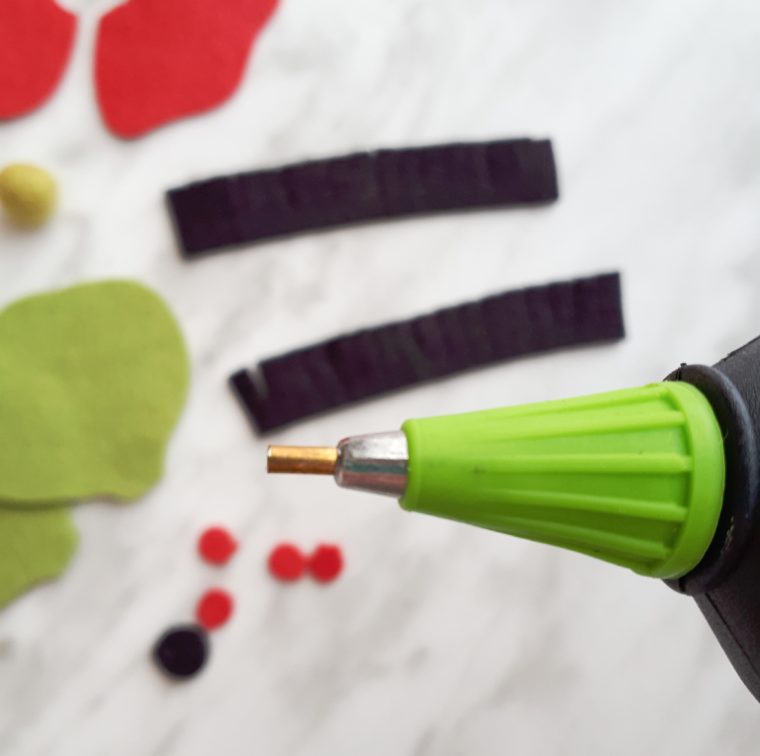 Here’s the thing with the leaves; this die has blades that cut slits into the pieces. So I pulled those blades out with a pair of needle nosed pliers. It was actually much easier than I expected it to be.

Simply sneak your needle nose pliers into the foam, get a good grip on the blade and pull. It should pull out easily.

This is a great way to manipulate your dies to be more functional for you.

Just make sure you wrap the blades up really well before you throw them in the trash. They’re very sharp!

To start, die cut 4 petals from the donut shape out of red. Cut one fringe piece out of black and 2 small green petals. And grab a 1cm felt ball too, I think it looks best in green for this flower.

If you need some guidance for how to cu out felt using steel rule dies, check out this tutorial I wrote. 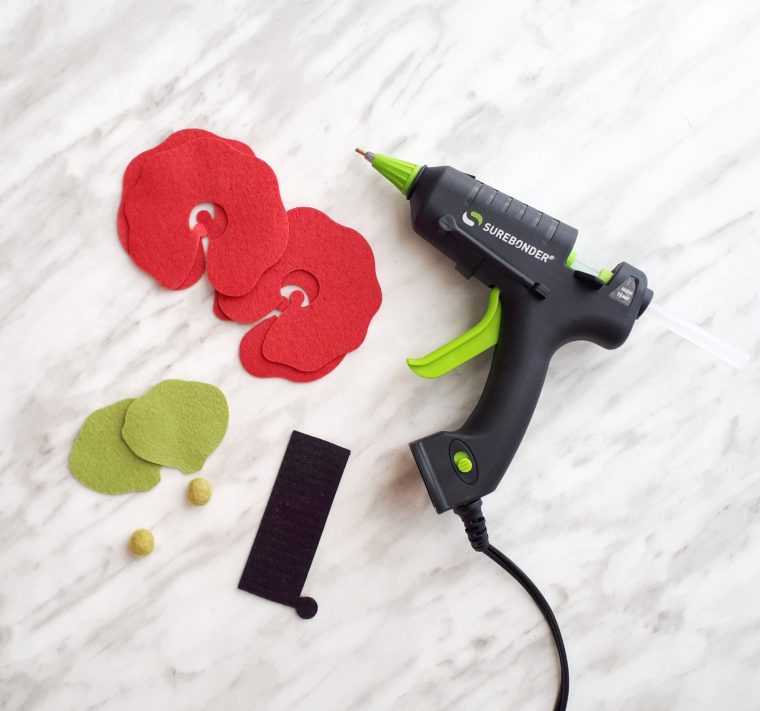 (Isn’t that a pretty pretty glue gun?! That’s because it’s all fresh and new out of the package and isn’t all covered in bits of glue and felt fuzz yet!)

Start by snipping off the extra circle on the fringe piece. Then cut the fringe in half lengthwise. Wrap and glue one strip around the 1cm felt ball. Start wrapping the second strip just by glueing down one end a-butted to the end of the first layer. Wrap it around without gluing it yet, and trim off any fringe that overlaps by more than 3 layers. When I did it I only had to trim off one piece of fringe. Then glue.

See how there’s exactly 3 layers of black fringe around the ball? 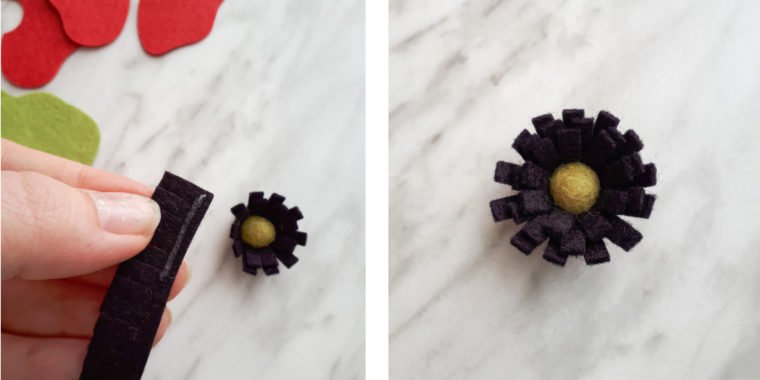 Next you’re going to take your donut petals and trim off the little circle bits.  Fold the donut piece and glue so that it looks like 1/2 a donut instead of 5/6 of a donut.  Then fold the other end so it now looks like 1/4 of a donut and secure with a little more glue. You want your petals to form nice 90 degree angles.

Now you just glue the base of the petals around the centre fringe. You might have to wiggle them in to get them to fit. It’s art after all, not science!

Once they’re secure, flatten the whole flower down and add some extra glue to the back to hold the shape. 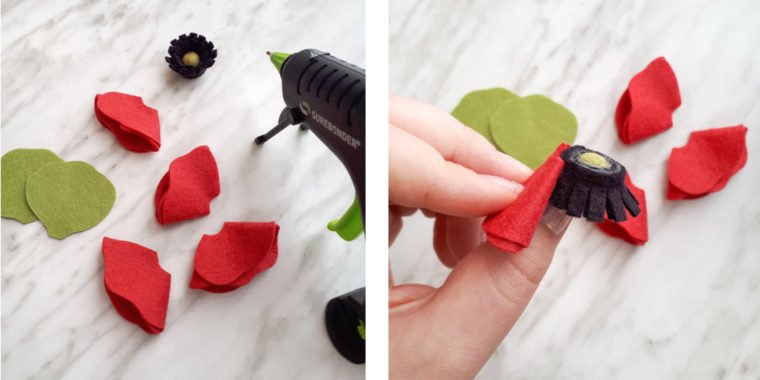 Overlap the leaves and secure with a glue dot. Fold the left leaf over onto the right and glue dot. Then fold the right leaf over the left. Now you have a little leaf trumpet! Glue it to the back of your pretty diy felt poppy! 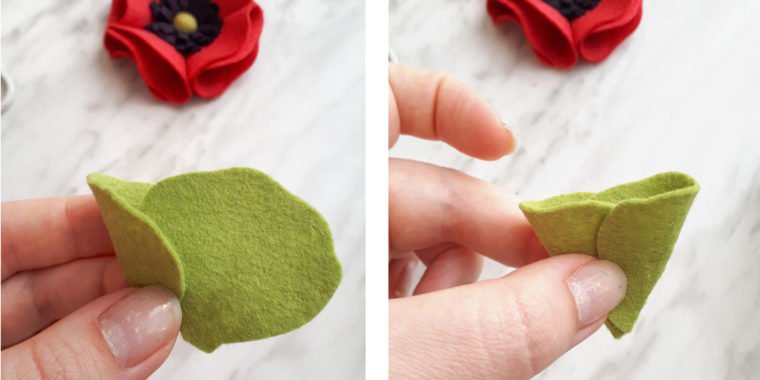 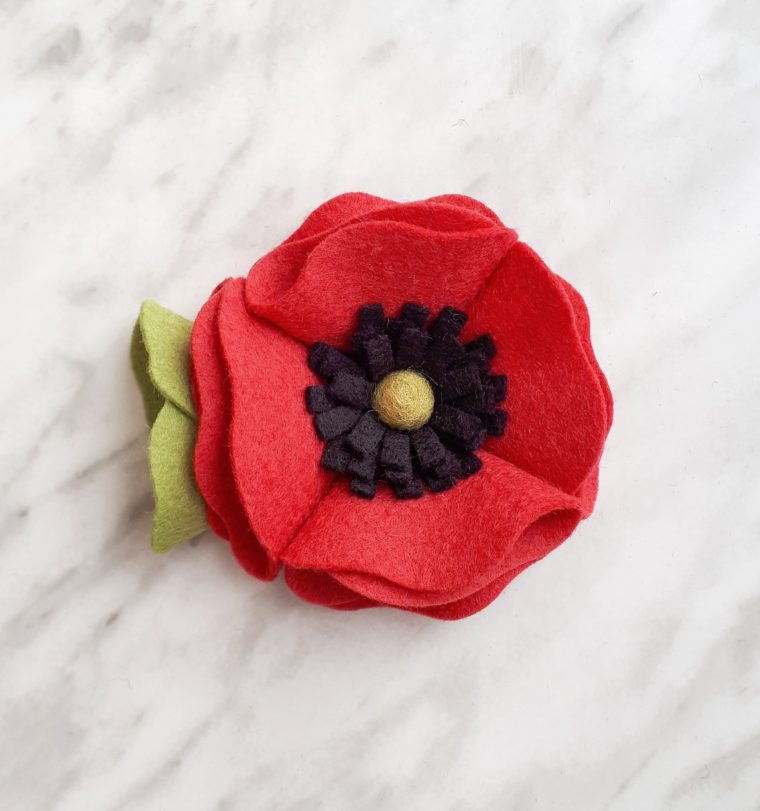 My goal with this diy felt poppy tutorial is to show that it’s possible to make lots of different designs with a single die, in this case the Sizzix Bigz L Bungle of Flowers. You don’t have to use the die in only the way it is presented. With a little creativity you can really stretch the intended use of the die. Dies are expensive after all! 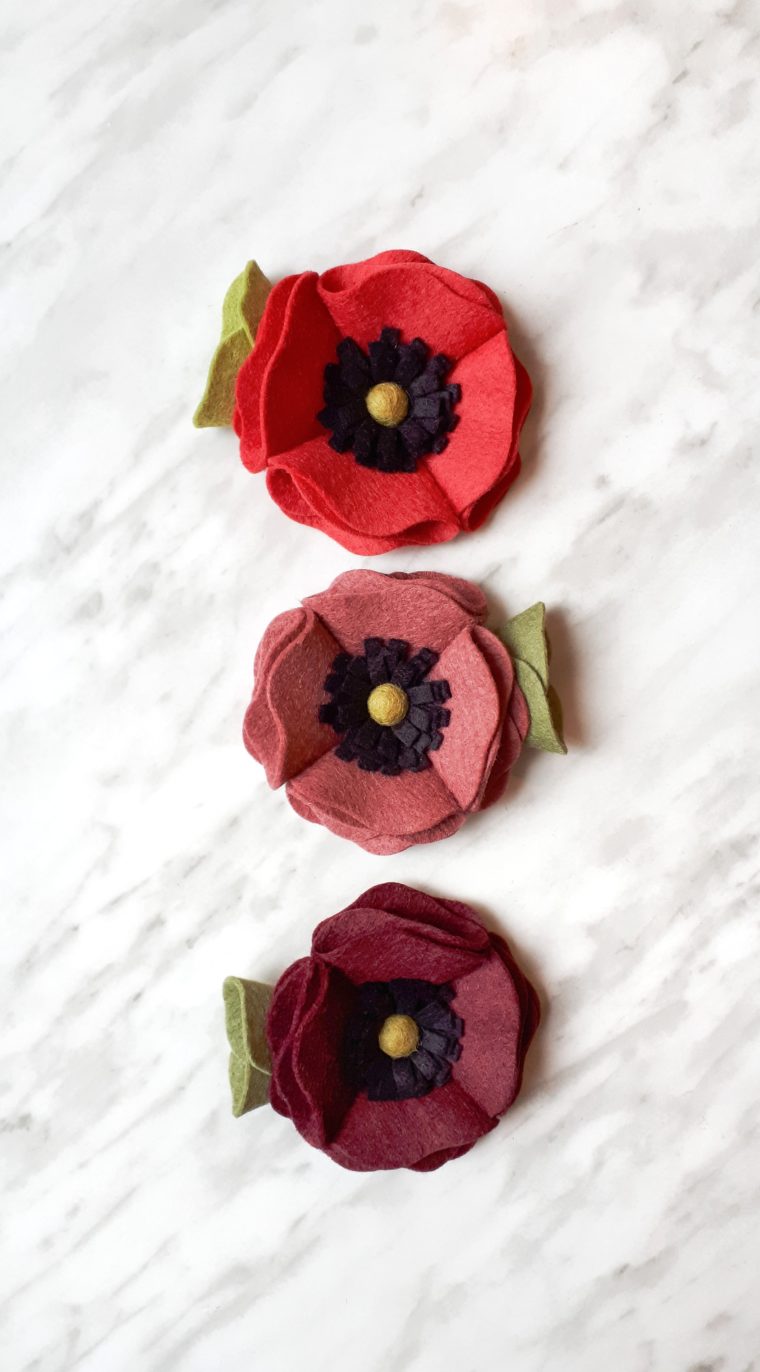 Don’t forget to check out the die here, and the Surebonder glue gun here. Once you go Surebonder, you’ll never go back! 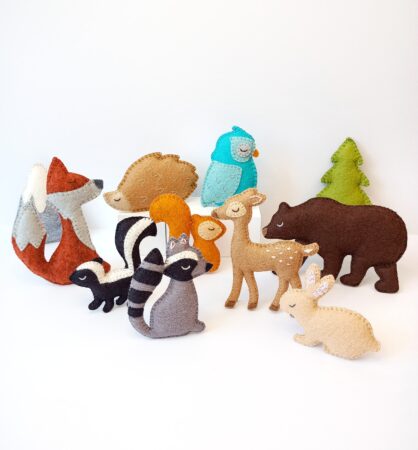